Interlude 1: feathers in the golf course

Aug 5 • Uncategorized • 4902 Views • No Comments on Interlude 1: feathers in the golf course 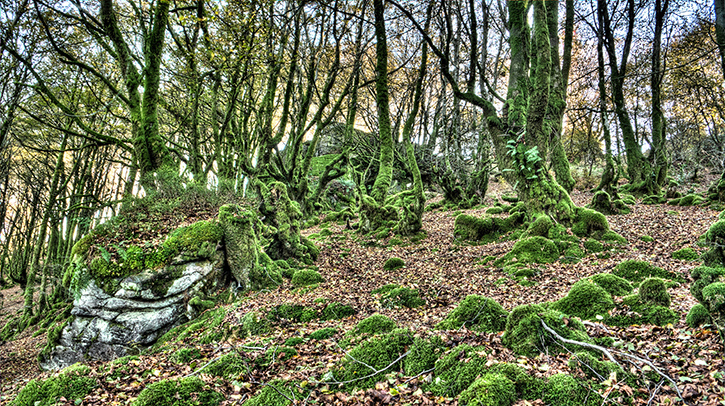 Not an Irish forest, but it could be (click to enlarge).

August is here and I am going to take a break of sorts, because I will be in and out, with no guarantee of having PC, laptop or wi-fi wherever I may roam. And, frankly, because thinking what to blog about is actually much harder than blogging afterwards. 21 chapters after I begun, I am running out of ideas. So it will be scattered short stories until I come finally back, hopefully for the second week of September (if I can finally arrange a week I pretend to spend by myself visiting the beaches of Normandy).

I hope you are out there doing better things than reading blog entries, even if they are mine, and you won’t notice my absence at all. If that is not the case, feel free to read through my archives. I try to blog about things that do not go out of date…

I do not play golf. I would love to, but there are no golf courses near where I live, too many mountains, and going to the closest ones is both long and then costly. But I used to go, during my childhood summers in Ireland. It will do for a couple of stories…

First time I went to Ireland I was 12. Went to learn English staying for 5 weeks with an Irish family, in Castlecomer, Kilkenny County. I had quite a hard time there. The language was not a problem by that time, but the family, well, actually the mother, a rather unforgiving woman, made my stay rather difficult. I was calling home like three times a week, and I would end up crying for the first two weeks. It was a different country, with different customs and specially different rules. It was not easy. The family had 6 kids. One boy was my age, another a little older, then there were three younger girls and a toddled who howled at the moon through the window, using the couch to stand. It was creepy and funny at the same time.

I made friends pretty fast with the eldest, but since the other one was mamma’s favorite, she would punish my friend over any nonsense to force me out with the second. And we just wouldn’t get along. He would play boring games, didn’t care for nature, sports or Star Wars figures, and could not even mock fight. Whatever happened he would tell his mom and I would be in trouble. The eldest son, however, was a kin spirit. Showed me wonderful places, parks, rivers where we found fossils, trees to climb, and he used to box at school. We had great times, far as I remember. All this was 30 years ago, so my recollections are surely pretty distorted. However, I keep fond memories of this 14-year-old boy who treated a 12 like an equal.

The only thing I enjoyed doing with the kid my age was playing “golf”. and I say “golf” instead of golf because we would play using only two clubs and three or four balls. I am a lefty, so you can imagine. But I loved the golf course. Those lush green combinations of fields and forests of Ireland, a pleasure to walk through. Besides we had two balls each and we spent long times trying to recover them, or get spare ones beyond the tree line. The story that I wanted to tell happened in one of these.

One day we were chasing balls into a wide copse when I startled a thrush. It happened to be a young one, one of these with a small beak and wide yellow lips, that couldn’t fly very well. So cute. I have always been all for rescuing animals so I decided straight away, wrong of course, that the little bird needed rescuing, and set out to catch it with my cotton vest. It was an over-sized ugly grey summer vest my mother had acquiesced to buy for me as a sort of bribe, a couple of days before I left for Ireland. My mother was always pretty stubborn with languages and got all of us speaking at least two extra languages. My elder sisters learned English and French, me and the youngest learned Basque, once it became legal after the dictatorship ended. French I make up whenever I travel there and they seem to understand it somehow. They do appreciate my efforts anyhow. Thanks to my mother’s stubbornness, the way me and my sisters have faced the world was changed forever.

Let’s go back to the story. The thrush couldn’t fly far, but fly it could and hopped some five six yards every time I got close, until it cleared the forest and flew into the open golf course. I thought then that it was mine, since I could run faster in the open than it could fly, and besides it was already getting tired. Soon it would be safe and sound inside a box at home, just like my father used to keep them, and we would feed it with small earthworms and bread crumbs. I was no more than three yards away when something dived from above, landed on top of the little thrush talons first, and took off sluggishly. I thought it was a hawk, but it had to be a kestrel or some other small bird of prey because it had a hard time lifting the thrush. I did not stop running. I raised my vest and hollered until the raptor released the thrush and flew away. I took the little bird in my hands, but it was too late. The feathers were all matted and bloody, the talon wounds too deep. The little bird was dead in a matter of seconds.

You can imagine my sorrow. All my good intentions turned to folly. I had caused the death of the bird I wanted to protect. I do not remember how we brought the little bird back home. I wanted to bury it in the garden. The mother, however, was disgusted, and insisted on throwing the bird to the garbage. I just think how I had to look, a poor dead bird in my hands, my face dirty for crying a river, drowning in guilt. I feel sorry for the kid I was. And she didn’t give a damn. After a long bitter argument, there was no way I was throwing the bird into the garbage can, she accepted to release the elder boy, who was confined to his room for something or other, and let us go beyond the garden, into the forest, and bury it there. I didn’t get a shoe box, though. My relation with that woman, which had been cold up to that day, turned gelid from then on, but I did not care anymore. Somehow, that argument helped me get hold of my situation and accept I was on my own for some time. I did not improve my golf swing but I slowly got into the swing of things and ended up enjoying the second half of the stay to a point. I even wrote a letter home telling the whole story of the thrush and how I had screwed up despite all my good intentions. I still have that letter and will show it to my son next year, when he turns twelve, and then to the other, when the time comes. It will be a time travel conversation of sorts. A little magical moment.

I sometimes think of that woman, taking care of six kids and accepting a seventh in summer to get some extra money, and I am a little sorry for her. Maybe it was not the life she had planned, I do not know. I don’t know what embittered her, but bitter she was. My mom was pretty unforgiving too, but in comparison she was Mary Poppins. Never heard of them again. Sometimes I wonder what might have been of my friend Ollie. I hope life has treated him well, but I will probably never know.

I came back having learned a few things apart from practicing my English. There are a lot of things you take for granted that are not so in other countries. Adults are very different one from another and are not always fair or right. You have to be careful with whom and how you help. Maybe your help is not necessary and it might turn out to be harmful. Good intentions are not a justification to meddle in other people’s businesses. And, sometimes, you have to stand your ground, despite the odds. I have always been an independent guy, but I think it was in Castlecomer on those first three weeks, that my resolution to be a lone wolf of sorts began to take shape. And I have never regretted it. I have paid for it, now and then, but regretted, not.

I went to Ireland again the following year, to a totally different place. I didn’t call home once from there (actually not true, I did call the last week to ask for more money), had the time of my life, and I run some “golf” adventures too, but that is a story for another interlude.

do not have a thrush, so here is this nice redhead (click  to see a fractal version).

The beech forest picture is a HDR made of 5 shots not 30 minutes away from home. I have many shots of this forest and similar ones in my gallery of forests. The redhead duck is a single RAW HDR. More creatures in my gallery of Fauna. Both images were later processed to leave them the way I like it, as usual. Some contrast and color enhancement, some darkening.

You can find lots of images like these in my galleries. This pictures can be printed in photo paper, canvas, metal or acrylic surface from 8″ up to 108″ in some cases,  or in greeting card format. You can check them by clicking the images above. I am all in for customizing pictures. All of them can be retouched in many ways, texts added, altered, changed or deleted. Ask freely.