Chapter 10: no such thing as magic

The Elven Forest (fragment). A place full of magic and wonder, where you can almost see the elves and fairies hiding just off the corner of your eye (click to see complete picture).

Well we all know magic is bullshit, right?

I think magic exists. I consciously choose to. I have not seen anything magical in my whole life, no elves, no trolls, no wizards conjuring evil spirits… however I have seen the effects of magic. In my kids. C’mon, you are thinking, now that is cheating. And why should it be? My kids believe firmly in magic. It is part of their reality and fills their lives with a special light. That light illuminates my life indirectly, so  I live under the effects of magic. Therefore it exists. And I am part of it.

I remember Christmas, when I was a kid. I would pick up presents in three different houses. The Three Kings would come to my house, Olentzero, the fat and dirty charcoal maker with a black beret and smoking pipe who brings presents to the Basque kids, would come to my uncle’s, and the child Jesus would come to the house of my other uncle. They would all leave presents. When the Three Kings came —Balthazar would bring mine— we would go early to bed in order not to catch them red-handed, because they would vanish to never return. We would leave wine and cookies for the Kings and bread for the camels. The following day we would find it all eaten and drunk up save a few bread crumbs, along with our presents and a letter telling us to behave better the following year. I had friends who knew before I did that it was our parents who took care of it all, and I would fight them in the school yard because they were telling lies. And I would have none of it.

One day, my parents told me the truth. Christmas lost all its luster and remained pale, dull, material, until new kids arrived in the family. First my nephews, then my sons. And, with them, through them, magic returned in full force.

Magical moments that never happened and I will never forget

Some five years ago, I bought this vintage Playmobil castle  for my kids on eBay. Wonderful thing, It is funny how we get our kids all we couldn’t have or particularly loved, but that is another story. The thing is that it did not arrive in time for Christmas, so Olentzero left a note instead. He would bring the present as soon as he could… The castle arrived a week or so later. My wife and I staged it just perfect. I sat with my son watching TV before lunch. My wife phoned me, I answered, got up and said “Hello, Olentzero”, while I left the room towards my office. My son, of course, was tailing me from the moment he heard the name. While I talked to Olentzero, my wife took the box and put it inside the fireplace by the TV we had just been watching. I mimicked a conversation, “…You got the present? …You are bringing it? …You mean now? …The Fireplace? …OK. Thank you, Olentzero. Bye”. My son was looking at me, eyes so wide open. I told him “The fireplace, go!”, and he flew back to the living room.

The fireplace doors, closed a minute before, were ajar, and a big box protruded from inside. My son took the box out and he just couldn’t believe his eyes. I told him not to forget to thank Olentzero and he got half his body inside the fireplace and screamed his most heartfelt thank you ever up the chimney. He was so happy, so full of wonder… He is eleven now, but he still remembers. And maybe still believes. I do not know how much longer, since some of his friends already know and I had to find a way to fix that into my scheme (which is another story). I think he probably knows but is in no hurry to get the confirmation, so we play along.

I do not attach magic just to Christmas. I have managed to spread it all through the year, intertwined with our local mythology and nature. We have our particular kinds of trolls, fairies, wizards, giants… most of them are protective spirits, and Olentzero is sort of a bridge between Basque paganism and Christian tradition. The one I like most is the Lord of the Forest, called Basajaun. The Basajaun is an old but strong creature, shaped like a naked man that covers himself with his long beard. He can change his size, and he protects our forests and the creatures in it.

We were in the mountains one day when we heard a loud isolated bang. My kid looked at me shocked and I told him it probably was the Basajaun landing. The Basajaun has to take care of a lot of forestland so he jumps from one mountain to another and when he lands he makes a loud bang as the one we had just heard. My guess it was the shot of a hunter. So we walked on calling out for the Basajaun. I explained my son how it is very difficult to see him, as he can magically hide in plain sight if you are unworthy. To be worthy you need to respect the plants and the animals in the forest, to walk silently and to always leave the forest cleaner than you found it. We did not see him that day, nor the following or the next.

We will never see him, but we might hear him or catch his jump towards another mountain through the corner of our eye. I trail run three days a week along the mountains that surround the city where I live. Sometimes I come back and tell them I saw him. Last time we met, he talked with Xare, my boxer. He did not talk to me, I am just human, but he blinked at me, which is a huge honor. Then he jumped away through the larch, without touching a branch, and vanished in the distance. Days after I took them to the place where it had all happened and explained the whole event again in detail. I hope my sons will see him often when their own sons are of the right age.

Then you have the Tooth Fairy, a Tooth Mouse here, who visited us just last week. My wife over-kills it and brings a little present to each kid every time one of them loses a tooth. There is another side to all this, let’s call it black magic. I have had soo many phone conversations with Olentzero and the Three Kings, to tell them the kids are not behaving and not to bring any presents that year… It normally happens in autumn, when they are beginning to decide what to request, and of course, they always know already because they are magical ever-watchful creatures. It is a dirty trick but it works when they do not want to eat up 🙂 My kids will walk carefully along river banks because we might upset some Lamia while she is combing her long hair with her golden comb and they can get mad at us and cast some spell, they learn the names of insects and animals and take good care not to step on them, lest they anger the Basajaun… Those magic creatures are both subject of admiration and respect. They help me create a nicer world and to establish rules.

I remember the day I told my little son that if he did not behave, I would wait for the Tooth Mouse and shoot him down with my BB gun if he didn’t behave. I told him I was joking right away because I couldn’t keep my poker face when I saw his. He was looking at me as if I was the most despicable creature in the world. You-wouldn’t-dare. We were laughing our heads off directly, but, for a moment, he hated me so bad.

Magic is, or can be, everywhere you want it. It is up to you to live in a stark naked pragmatic world or to add a magic filter so everything shines under a different light. To me it is not just a matter of creating a better world for my kids, it is also about re-learning to see the world with the eyes of a kid, the eyes we once had and that life, routine and pragmatism stripped from us. It is about paying attention, about taking nothing for granted. And the result is pure magic.

So go practice. Maybe there is no such thing as magic after all. But it sure works. 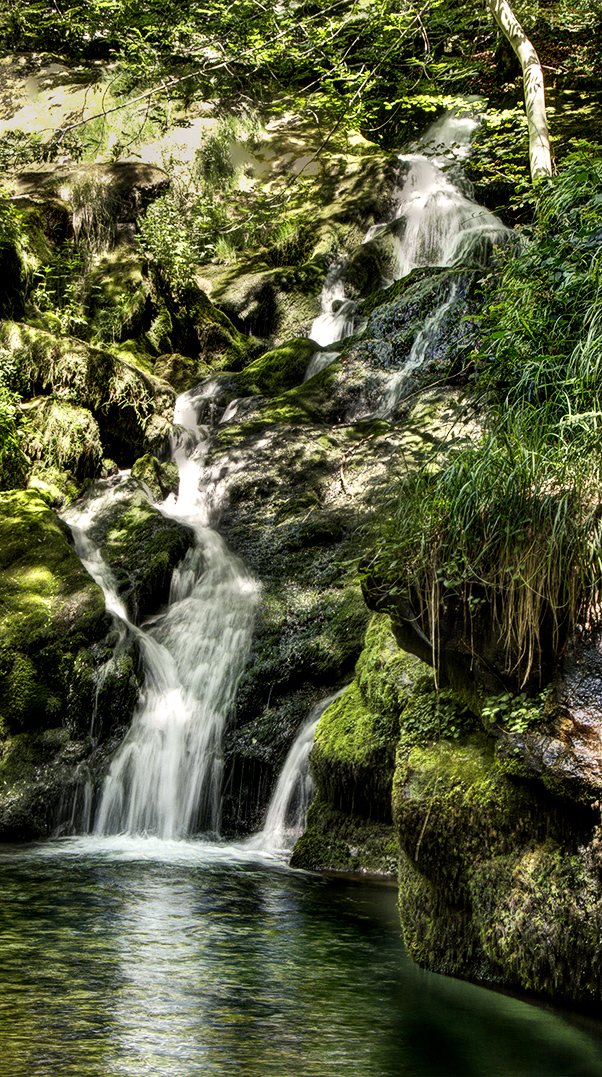 An old troll sat to rest by the waterfall and lost track of time. The rising sun caught him there ant turned him into stone but he didn’t seem to care. Now, his nose and cheeks covered in moss and his brow grown with weed, he still stares. And smiles. Can you see him? (click to enlarge)

The first picture is a panoramic  merging of several shots of semi-long exposure. The summit where it was shot was above the cloud-line so there is a misty atmosphere to it. The original picture you can see at the store is much wider. I flipped it horizontally and enhanced everything a little, but the whole place, a mountain crest full of neolithic burial mounds and dolmens, is just breathtaking, full of strange shapes created by decaying birch branches and trunks covered in moss.

The picture of the troll is a HDR composed of 5 shots . There is some work afterwards to increase contrast and enhance the bottom of the pond.

Mi kids were around both times.

This pictures can be printed in photo paper, canvas, metal or acrylic surface from 8″ to 72″ the first one, and up to 48″ the second, or in greeting card format. You can check them by clicking the images above. I am all in for customizing pictures. All of them can be retouched in many ways, texts altered, changed or deleted. Ask freely.