The Cliffs of Etretat, looking south (click to enlarge).

I said I would write three entries about my journey to Normandy. Well, I lied… The first was about what it felt like to travel alone, the second about war. The third was to be about all the cool stuff  I saw in those experience-packed nine days. However, this third post was getting too lengthy, so I decided to split it into two parts. Here’s the second, with some more cool stuff.

So let’s take it from where we left the last week. I had visited the B-26 at Utah and the Airborne Museum at Sainte-Mere-Eglise. From there I went to visit Pointe du Hoc, the battery the US Rangers took climbing up a cliff under fire in the dawn of D-Day, and where the craters and destroyed bunkers have been preserved as an impressive open air museum… 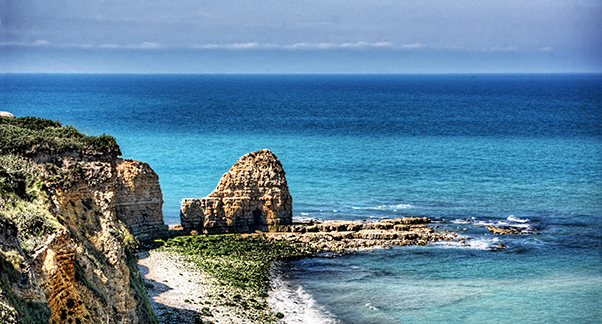 Pointe Du Hoc. You can see the cap of the observation bunker to the left (click to enlarge).

The views from Pointe Du Hoc are breathtaking, but walking the place is quite an eerie experience. Time and weather have not hidden the deep craters, the huge overturned bunker hulks, the shot holes on the doors… the unspoken story is very clearly visible and talks of extreme violence. This battery was a direct threat for the soldiers landing at Omaha, but after all the bloodshed, it turned out the actual cannons were not there. The men that climbed the cliffs found them later inland and destroyed them. You can Google some aerial images of the place. My resources were limited and I couldn’t jump high enough to shoot them, so I cannot show you, but it is an amazing view even today. 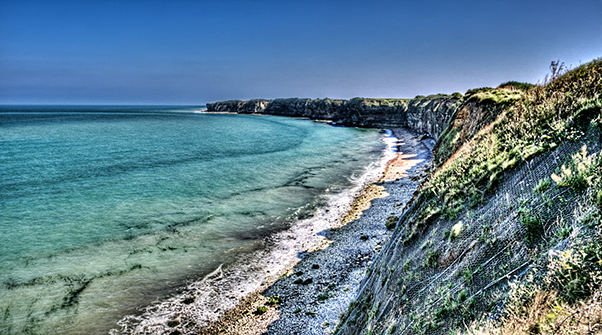 The Cliffs of Pointe Du Hoc (click to enlarge). 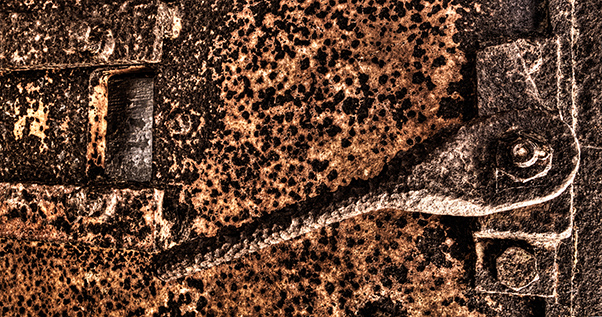 The rusty remains of a German Bunker door in Pointe du Hoc (click to enlarge).

Omaha Beach from the pier. Impossible to detach the view from its historical significance (click to enlarge).

I visited the cemetery and then I drove down to the beach. The bunkers are often still there. Some hidden by the underbrush, others built over with memorials… impressive non the less. There is a nice monument called “Les Braves” (the Braves)  that honors the men who took this beach by storm. I walked the sand there, took some with me and I am giving it away in small crystal jars with a little cork stopper to those of my friends who can appreciate it.It is good to see the way thy look at the little jar and at me quizzically and the way their looks change to one of respect and awe when I just say “Omaha”. I know they are going to treasure the little jars forever and I have not given away a single jar that will not be properly appreciated or treated like just a souvenir.

“Les Braves” monument at Omaha Beach. That’s where I took the sand from (click to enlarge).

After visiting Omaha I drove on through Juno and Gold. We always talk about the beaches as if they were a unit, but they were so different from one another. Omaha is protected by a ridge that goes all along it, while the other beaches are more open, harder to protect. Gold is where the massive remains of the Mulberry Harbor still rest in the water. The actual size of this construction is hard to believe and the fact that it is little known is just as surprising. You can get an idea from this picture…

The remains of the astonishing Mulberry Harbor in Gold Beach. If you do not know what I am talking about, it is all those huge concrete blocks half sunk in the sea (click to enlarge).

While the Airborne  82nd Dick Winter’s 101st jumped over the west end of the beaches during the dawn of D-Day, the Brits jumped or glided on the east in no less dangerous and important missions. One of them was of general importance as it would, by seizing two bridges over the Orne river, prevent the German army from bringing  reinforcements to the landing beaches in the succeeding days and weeks. Those two bridges are now famous, particularly the one now known as Pegasus Bridge. The  British 6th Airborne Division landed three gliders right next to it and attacked in a lightning fast manoeuvre that caught the Germans by surprise. The easy part of the mission, capturing the bridge intact, was finished. Now came the hard part, holding it. And so they did until relieved. The original bridge was replaced by a new replica and the original is kept in a museum, for all to see. This is it.

The other British mission was almost suicidal. The powerful battery at Merville had been disposed by Rommel himself, as most of the other defenses around the coast and threatened Sword Beach, so it had to be taken out. As it was so well protected, a  contingent of some 600 troopers was sent to neutralize it. Of these, only 150 reached their target and knowing they had no choice but to win or die, they attacked. And succeeded. The losses of the 6th were terrible, but the damage this battery would have inflicted on the beaches would have been of another proportion altogether.

The C-47 known as Snafu Special  rests in the Merville battery museum. You can see one of the casemates behind it.

c-47 Snafu Special by the Merville batteries (click to enlarge).

C-47 snafu special by the Merville batteries (click to enlarge).

This visit to the Merville battery ended my journey to the World War, but before returning, and on my way back, I saw a few other cool things. The one I liked best was probably the cliffs of Etretat. A stunning view by all accounts I was fortunate to spend a beautiful evening there and enjoy the sunset. These white cliffs are the geologic continuation of those of Dover, and the view of the sheer drop by the white stone layered with black beads of flintstone is simply breathtaking. Took a few pics from places where it would have taken me a few seconds to hit the ground had I but slipped. Do not try this at home or when wet 🙂

The Cliffs of Etretat, looking north.

The Cliffs of Etretat, looking west (click to enlarge).

There are quite a few more things I saw, but this is getting too long again, so I will just tell you about a museum I visited on my way back and leave the rest for other occasions. If you want to see more of those pictures or some of the ones that do not appear here, you can check my Normandy Gallery. I am sure you will enjoy it.

I had planned to visit this museum on the way up, but the route was not right so I left it for my return. This was in the Loire valley, in Saumur, not in Normandy, but it was somehow related. Th Musée des Blindés. 250 tanks. No way I was going to miss it. Here are some of my favorites. I shot lots and presented them in these three versions.

Panzer Tiger on a flat black background (click to enlarge).

So, here ends my relation of cool stuff I came across on those wonderful nine days. If you enjoyed the visit to this blog a fraction of what I did mine to this beautiful land so full of history and stories, I stand satisfied. See you next week with some other inspiring thoughts and images.

Once again, all you are seeing here is HDR. some of them are single images and other are panoramic compositions. These are series of HDR images that I later merge into wide panoramas. I suppose lots of people are already doing this, but I have developed this technique on my own and, as far as I know, I might as well be the only one doing it. Haven’t checked if others are doing the same. All the panoramas range from 3×5 to 5×5  HDR. That is 5 shots of each of the 3 to five pieces that form panoramas that can be printed up to 108″ wide.  I did not shoot many pictures in Normandy. You can see them in my Normandy Gallery. There are a few 108″ panoramas there and lots of cool stuff.

You can find lots of images like these in my galleries. My pictures can be printed in photo paper, canvas, metal or acrylic surface up to 108″ in many cases,  or in greeting card format. You can check them by clicking the images above. I am all in for customizing pictures. All of them can be retouched in many ways, texts added, altered, changed or deleted. Ask freely.

© 2023 inspiring thoughts and images | images for walls and minds