The FIFA World Cup Trophy. As any other competition, a championship disputed by a lot of losers who happen to win once in a while (click to enlarge).

Winning is all, a lose-lose situation

The runner-up is the first of the losers. I hate that quote. I not only think it is utter crap, I also think it is bland, conformist and childish. It is a loser’s way to reinforce himself when he wins. I hate the world loser also the way it is normally used. Dividing the world into winners and losers is plain stupid, unfair and unreal. It is just another way to manipulate us into some behavioral conducts that are useful for some things, particularly to make us compete and to see all other as adversaries. That is very good for increasing production and to make us work harder, but not for living a balanced life. I buy none of it.

I am a pretty self-centered person. I do not judge my efforts and my achievements in comparison to the rest of you human beings that fill the world. When it comes to determining my own value, you are all non-consequential, insects, amoebas. Even less. I do not give a damn how good or bad you all are. When we are talking about ME, you are just not a factor to take into account. When I have to determine my own value I only compare myself to myself. Am I doing fine? Am I doing better? Could I do better? Should I? Is it worth it?

So why should I be satisfied just by defeating somebody? That doesn’t make me any better or worse than what I already was before. It does not say if that somebody and me are both good or both bad. Just who is better. A relative, meaningless information to me. Totally insufficient. If you really have some real self-esteem, that is.

You see, I am already a world champion. I am the best myself in the world. So all that’s left for me to do is improve and never be totally satisfied, never surrender. Exactly your case also.

You wanna compare? Man up, and do it right

Take the fastest man on Earth. He is ridiculous. A fat lion would catch him, without really meaning it, on a bad day. Hell, an Elephant would catch him, and elephants are fat. An old cow would put him to shame. The fastest man on earth, is a disgracefully slow creature. The fast man will say it is not fair, he has just two legs, blah blah blah. Loser’s excuses. The fact is that he cannot run for shit. He is only fast if he compares himself with other ridiculously slow creatures like the rest of us. A damned chipmunk would make him blush. OK, that is not true. The fastest man on Earth, a few more guys and a very few women would be able to defeat a normal chipmunk in a running court along 100 meters. But nowhere else or in a longer race. And we are not talking about a trained chipmunk. Just pick one. And the truth is that if things got serious, we would never catch the damned creature by running and we could never stop her from biting us if she meant to by running away either. If a hundred of chipmunks decided to eat us they would eventually outrun any of us, fastest man on Earth included, and eat us. Thank god they only eat nuts and such… What was I saying? Ah, yeah. Disgraceful.

So why is the fastest man in the world such a big fish? Because we are dumb. Because we value relatives instead of absolutes. Then this fast guy, or that football player, or that F1 pilot shows on TV and tells us to buy something and we do. He is so fast, he gotta know something. Crap. He is slower than a chipmunk in any but the most favorable conditions. Winning is overstated. And we cheat when we compare outwards.

Excelling is not relevant

You can manage yourself pretty fine and have 10 million people doing things better than you. Hell, you can have 10 billion. You could have 3,000 billion and still be above average. You do not need to excel. Excelling is only relevant for those who need the approval of the rest to feel good about themselves. If you measure yourself by your own ruler, all that becomes irrelevant. What matter is doing things fine. Not better or worse than somebody else. Just fine. And then, to seek to improve.

You can be totally satisfied wining nothing, and you might be totally unsatisfied even if you win. Don’t get me wrong, I like wining.  I prefer to win. However, I have won matches I did not enjoy because I played badly, only that my opponent did things even worse. And I have enjoyed greatly matches I lost because I did things really well against an opponent that was even better. Of course, the rare days we both play well and I win I am even happier, but not because I won, but because I had to play really fine to achieve it. Victory is the evidence, not the goal. Or should I have been dissatisfied if that day when I played superbly my friend had the game of his life and defeated me all the same? Makes no sense. Now apply this to everyday life.

You can be good, bad, better or worse, but always comparing to yourself. If you are good at something and somebody is better, good for him. It does not make you bad. If you think it does, you are a loser. And you will always be, because if you do not always find somebody better than you, it is just because you didn’t try right. Rest assured, no matter how good you are at anything, there are, at the very least,  thousands of people better than you out there. And even if you are the best of the world by any stupid standard competition in which only a 0.000000001% of the people in the world takes part, you will soon not be anymore, and besides there is a chance you suck at all the rest of the things you do in life because the only thing important for you is to excel in this one. Lose-lose.

I am not trying to say you cannot try to excel or that wining or competing is bad. I am talking about dealing with victory, defeat and their meaning.

What is a loser?

If I have to compare myself to somebody else I will never take one single thing. I will take the whole picture. His life against mine. I do not give a damn if runs faster, has a better car, his wife is prettier or if he is stronger. I will put everything on the scale. If it turns out he wins, I will use him as inspiration to improve, but I will never be the loser because wining does not depend on how good he is. If I win, I will use it as inspiration to improve because being better than any other doesn’t really say anything about me.

You need to be fair to yourself. Fair is not easy. It does not necessarily  mean you need to cut yourself some slack. Maybe it is the opposite. What you need to do is to stop comparing and to value yourself for what you are worth, accept it, be humble and proud about it, and from there, try to improve. And never surrender. If you know your worth and always try to improve, to be better or worse than the rest is of no consequence and neither is winning. Never let the rest tell you what you are worth, particularly because those who demean you will be the ones that need to put others down to feel better about themselves, the real losers in life. You just ignore them and respect yourself. That said, when you win, and try you should, enjoy. And respect those who didn’t.

So go out there and enjoy this victory nobody but yourself can take from you. You are the best you in the world. A true world champion. Congratulations. 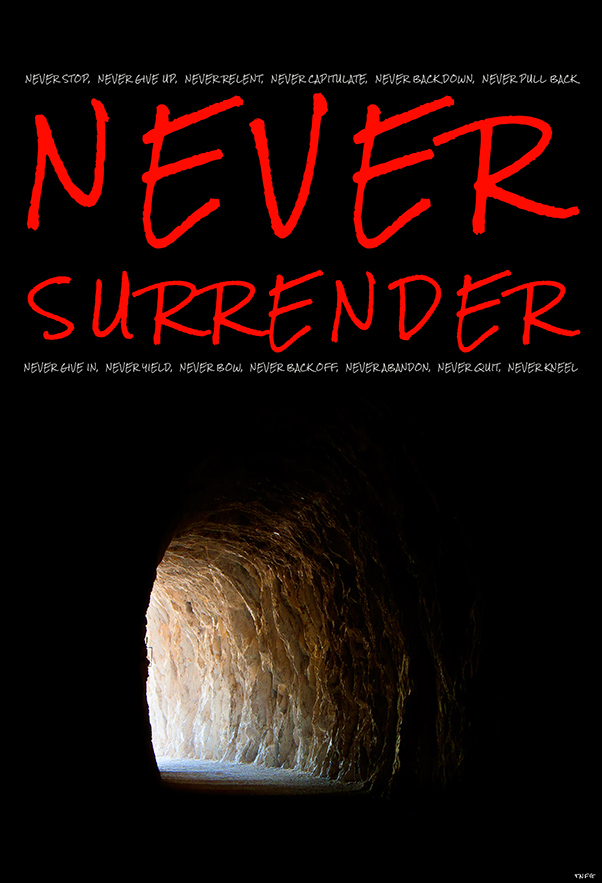 You are already a World Champion, so never let anybody demean you and never stop trying to improve (click to enlarge).

The first picture is a single shot of the 2010 FIFA World Championship Trophy that I processed to separate from the background. I then added the textured frame and the text.

The picture of the tunnel is a HDR composed of 5 shots . There is some work afterwards to increase contrast and enhance colors, along with some merging of parts extracted from one of the original ones or other. Then I added the text in big red letters.

This pictures can be printed in photo paper, canvas, metal or acrylic surface from 8″ to 60″,  or in greeting card format. You can check them by clicking the images above. I am all in for customizing pictures. All of them can be retouched in many ways, texts altered, changed or deleted. Ask freely.