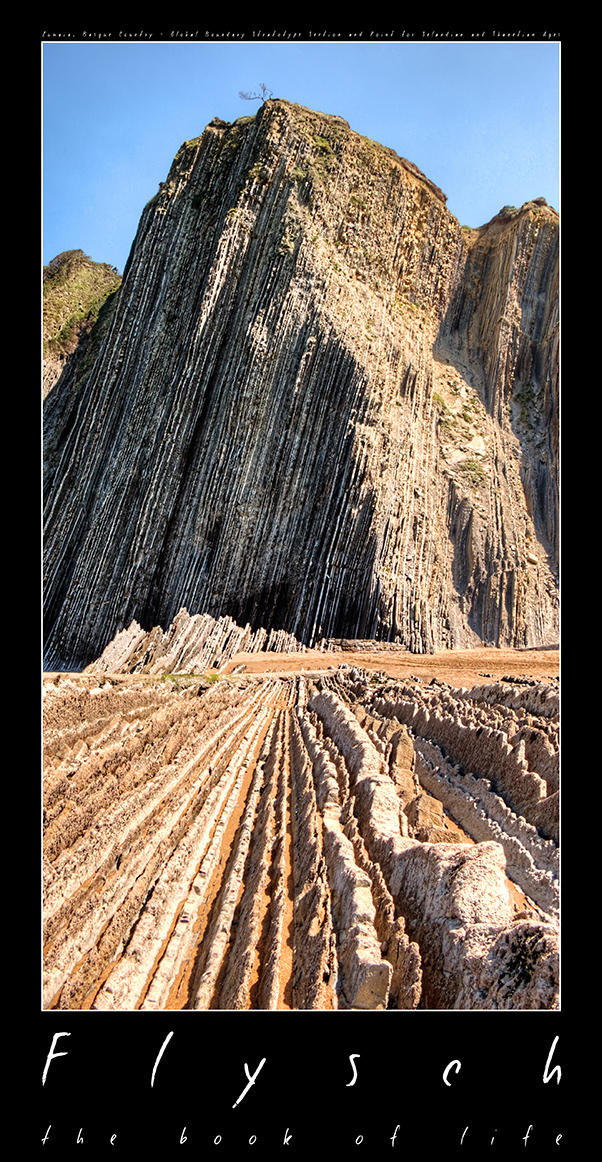 The different strata tell us a story we should pay heed to (click to enlarge).

I do not care much for “ecologists”. Wait, keep on reading,  let me explain. I like anti-ecologists even less. I like sensible and sensitive people. “Ecologists” and their nemesis usually defend extremes. If I had to take sides, I would side with the “ecologists”, but since I do not have to, I don’t. Ecologists, let me drop the quotes,  say we are a harmful species that is destroying the planet, as if we were not just the result of nature, as much as a green hummingbird or a daisy. The people they oppose are the big companies that thrive sucking on mother Earth’s resources with little or no concern for how it affects locally and globally. They want us to buy as much as we can afford and to work as hard as we can, so we are able to afford even more. They defend this harm is not proven, unimportant, unavoidable, or all three of them. And I think they are both dead wrong.

My “dislike” for “ecologists”, and allow me to use quotes in both terms again, might come from the way they tend to focus in certain parts of reality while they freely ignore others. Also from the way they often express themselves so self-righteously. You cannot defend whales and then go home, crank the heater up, take your clothes off and walk barefoot while it snows outside and you scream outrage through your last generation laptop or smartphone. You are either fully responsible or you are not, and in the later case you are only acting to deceive your conscience. I think there is a lot of that. Ecologists also tend to patronize the earth, as if it depended on us. The fleas defending the dog.

Companies, on the other hand, only respond to profit, and if numbers go everything goes. I do not need to stress this point because it is all too obvious. Our companies are destroying forests, ecosystems, societies, all over the third world, some of the second, and the first where they can get away with it, so I am not going to insist on that. They also spend a lot of money and effort in educating us so we are the sort of person they need: a blind consumer unit. It is called advertising. However, ecologists and companies have something in common: they are both largely  uncompromising, and they both operate with their backs turned away from reality.

There is no black and white here. Nuclear is terrible if it fails, but hydro-electric stations are also locally bad because they transform the environment and affect the rivers. Let alone coal. Oil is terrible, dirty, war producing, but for example the use of bio-diesel is changing the crops around the world and causing famine… You can go to live in the mountains, foraging, but you will either die or affect other animals whose food you are going to be eating. There is no way not to affect. There are only ways to affect less.

I do not like ecologists because they point their fingers as if the problem had nothing to do with them, but the fact is we are all responsible, both the destroyers and the defenders, because we are all part and a byproduct of our society. We all live in a world that functions on fossil combustibles and there is no way to elude this.  However I think they all have it wrong: We are in no danger of destroying the planet.

We only risk destroying ourselves.

I am going to get briefly technical here, but follow me through because it is going to be short and easy to catch.

Look at the picture that begins the post. That geological formation is called flysch. It is a place where the different strata of the succeeding geologic times can be seen without effort. Those strata are like leaves in the book of life. They tell us about the past, the climate, the vegetation, all through their contents in pollen and fossils.

To follow with the book simile, those strata, or leaves, are grouped in chapters (known as periods), and those chapters are grouped in parts (known as Eras). We all have heard names of some of those chapters, particularly, the ones corresponding to the Era of the dinosaurs. This chapters are called Triassic, Jurassic and Cretaceous, and the whole part of the dinosaurs is called Mesozoic. The part before that was called Paleozoic, with chapters like the Carboniferous, the Ordovician or the Permian. The part to which we belong is the Cenozoic, our chapter is the Quaternary.

We all have heard of these names. What we do not know is why or based on what those leaves are grouped in chapters and named, and the reason is quite blood-chilling: Mass extinction. Each of those periods have a content of fossils. When this contents change, because some species disappeared and others appeared, we change the period. When there is a radical change in fossils we change the era. We all know the dinosaurs died out at the end of the Cretaceous because of a meteorite impact. That ended the Cretaceous period and the Mesozoic era. From then on the classical dinosaurs were out of the scene for good. Welcome to the Cenozoic Era. In the Permian period, the last of the Paleozoic, just before the era of the dinosaurs, 70% of life in the seas and 90% of life on Earth vanished. The worst extinction ever. But not the only one.

The earth has gone through lots of periodic extinctions, some of them massive. It is nothing new and will happen again. And again. So we are a little wrong when we think we can damage the earth. We can only damage ourselves. If we kill most of the life on Earth, slowly as we are doing now or abruptly via nuclear war or whatever, we will cause our extinction with it. Earth will recover in less than a million years. Considering fossil life has been detected more than 650 million years ago, that dinosaurs reigned some 180 million years, and that they vanished some 65 million years ago, one million years is the blink of an eye to life on Earth. So let us not get carried away. We cannot harm this planet or the life in it. We can only hurt and destroy ourselves.

Regretfully, that, we can do. So I think that both ecologists and those they fight should realize they are not fighting for, or damaging, the planet, the mountain gorilla or the Pomeranian chipmunk (I made this one up). We are fighting or damaging our sons and grandsons place to live. We are damaging or defending people we are actually going to meet, and their sons. This is not something that will have repercussions ten centuries from now, it is something we are going to suffer, or see others suffer. So it is about time we all get sensible and sensitive and start, each of us, doing something. And that something does not mean fighting for the Caribbean polar bear or the five winged locust of the Seychelles. It means acting sensibly, sensitively and responsibly. In other words, behave. This world is not ours, we should try to leave it better than we found it, and if we do not do the effort ourselves, we have no right to accuse any other.

We can keep on not thinking, or we can begin to question what we do and, little by little, start to act more responsibly. And most important we can pass this attitude on to our children, the same way our parents passed the opposite on to us in too many cases. They mostly didn’t know. We cannot say that anymore. We can do so many little things that improve our effect, that it is all too easy to find the ones we can carry out without feeling annoyed. Just gotta find them. And then go for the others. The only thing that is going to stop those big companies from acting with short-term strategies is us buying their products on long-term strategies. We have the choice to buy or not to buy, to consume blindly or knowingly. And that is all we need to force them do things right.

Do not listen to the ecologists. It is not for the earth, it is for us. Be selfish. Do something. 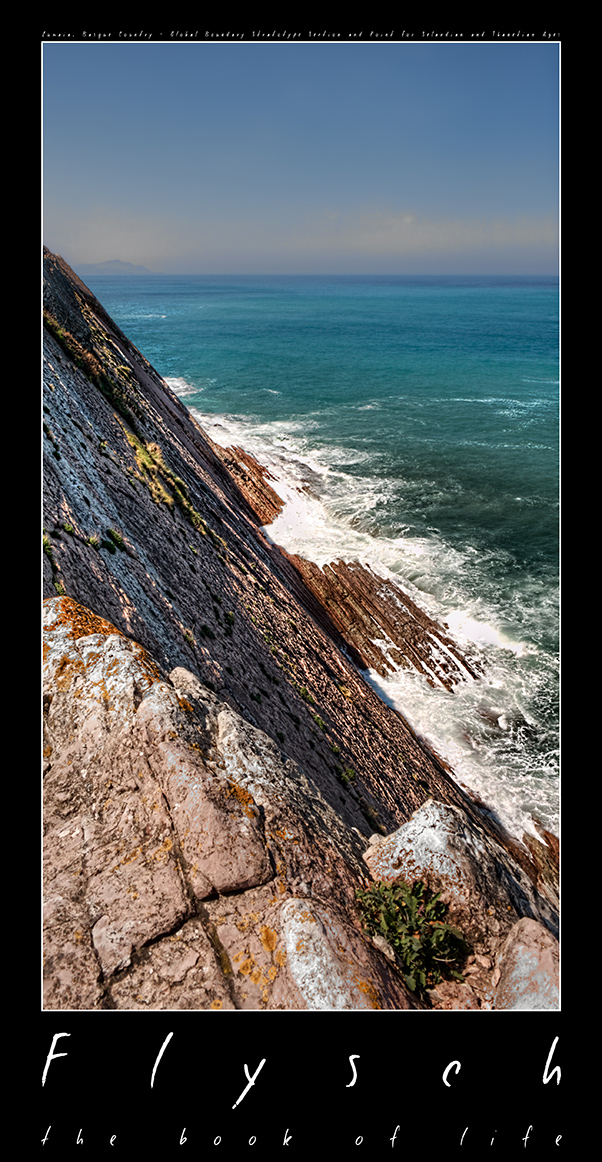 This beautiful section of flysch lies right above the K-T boundary, the strata that defines the extinction of the dinosaurs (click to enlarge).

Both pictures are HDR composed of 5 shots . There is some work afterwards to increase contrast, but they show pretty much what your eyes would see if we got there on a similarly wonderful day.

This pictures can be printed in photo paper, canvas, metal or acrylic surface from 8″ to 48″, or in greeting card format. You can check them by clicking the images above. I am all in for customizing pictures. All of them can be retouched in many ways, texts altered, changed or deleted. Ask freely.

I have to thank Cathy Jourdan for Featuring me in her blog Featured Artists today, July the second. You can see it in her archive.

4 Responses to Chapter 9: countdown to extinction

« Chapter 8: how to avoid lousy Mondays Chapter 10: no such thing as magic »