Chapter 26: walk in the dark 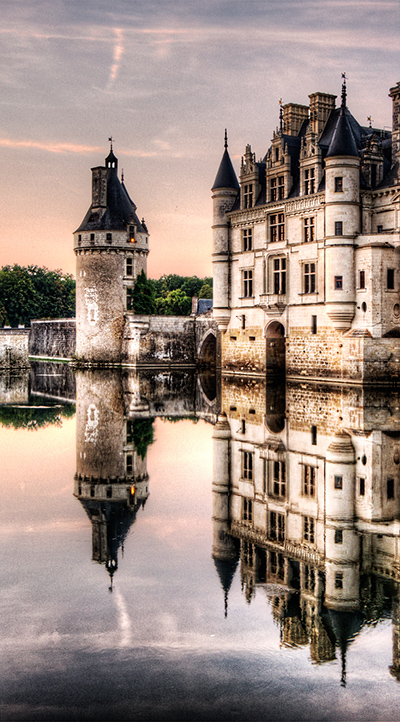 Making the best of something

I had some twelve hours to drive if I just stopped to rest, so I decided to split the journey in two and enjoy the road-trip. Returning home in no hurry, there was no reason I could not make the best of it. This extra day allowed me to visit four amazing places and bring home 45 pounds of some of the best quality flint-stone  in the world. However, I will just talk about the place I picked to spend the night and the little excursion I made under the moonlight.

The place I chose did not actually mark the middle of the journey. However, I had seen pictures of this peculiar castle of the Loire Valley years before and I wanted to visit it some day. This was the right chance. The Chateau is more or less isolated in the middle of the forest. I went there twice. First in the evening, then in the dark of the night. Both experiences resulted exciting in totally different ways. A walk in daylight, a walk in the dark…

From the camping where I spent the night, it took a 10-15 minute walk west along a forest path following the river Cher that flows under the castle in the same direction. I got to the camping in time, checked in, set camp and  went straight for the château. It is an exciting short walk. The trees hide the building and there is no clear vantage point till you are almost there. There is also a little island upriver, like a last defense against distant observation… you are trying to get to the bank and take a peep all the time, but there are always more trees ahead.

I got there in the nick of time. The sun was just setting. I knew I had to choose which side to favor so, as an HDR lover, I went for the sunset back lighting. I took two totally different shots. I shot the first as soon as I could see the whole building: 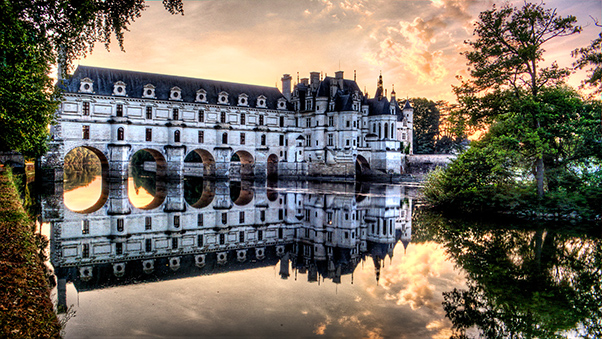 Sunset behind Chateau de Chenonceau and the island. The first glance at the whole castle (click to enlarge).

The second one, a little closer, the sun a little lower, totally different atmosphere. 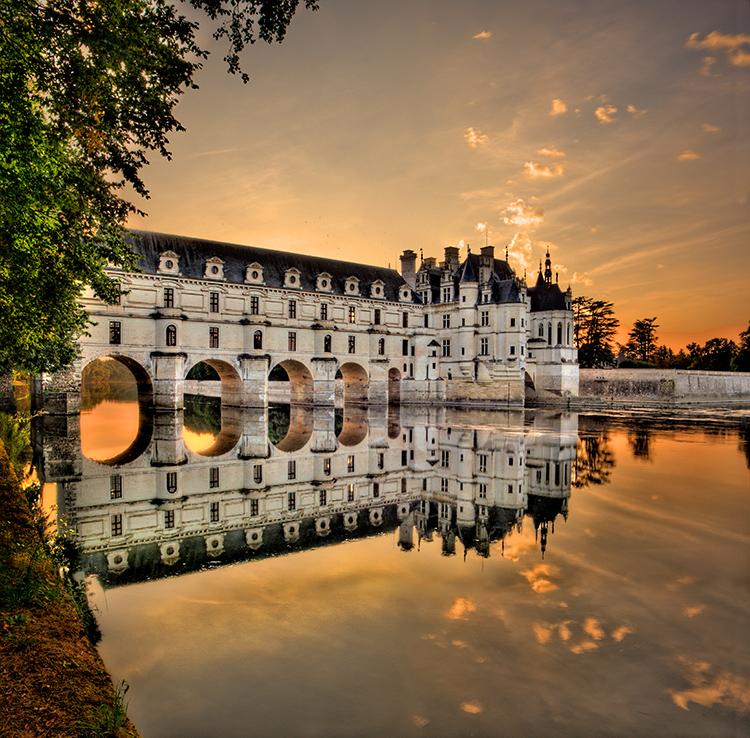 Sunset behind the chateau de Chenonceau – square (click to enlarge).

After this I walked on and shot eastwards. The sun was still touching the chimneys of the château. There are three things that compose these pictures, the château, the reflection and the sky. I picked the castle and the right hour but the perfect reflection and both beautiful skies westward and eastward were sheer luck. You can Google this château for images and you will find very few with the three parts captured at such a perfect moment. And then I used HDR to make the most of it. 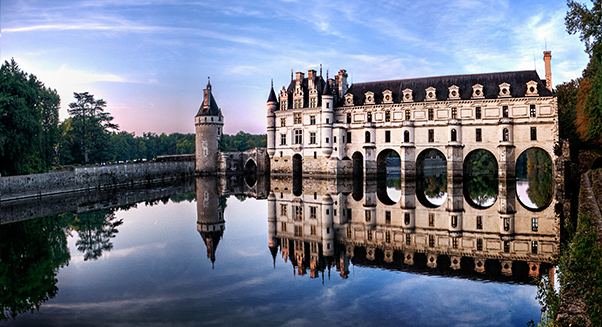 Chenonceau Castle In the evening. I would shoot this again in the night (click to enlarge).

I walked back to the camping happy as a hippo, cooked some rice and a steak with chips, and by the time I was done it was already dark. However, the moon was full that night and I wanted it in my pictures, so I sat outside my Two Seconds tent to make time, reading from my e-book reader and sipping an iced coffee.  A little later, when the moon was eavesdropping through the pines, I saw the mist was coming in too, so I picked up my stuff and set off. It was a little too early, which with the full moon so low, meant a little too dark too.

A walk in the dark

Thus started my second walk to the château. I do not know what I was expecting, I hadn’t given it a thought. This castle across the river is famous in the whole world, so maybe I had taken for granted a certain measure of civilization. Wrong. as soon as I entered the forest path again it was totally dark. Not pitch dark, it was a clear night with a full moon rising somewhere behind me, but dark nonetheless. I had my old dependable head torch, but it was designed for walking in campings, not for controlling a forest. And I mean controlling. The moment you enter the forest and leave the civilization lights behind, your ancestry takes hold. Night in the forest has been dangerous for human beings since times immemorial and your genes know. The front light showed the way, but blinded me to the rest of the forest and made me conspicuous, so I turned it off and walked on in the dark.

It was not a pleasant experience at the time, but now I remember it fondly because of what it taught me. I always say we should not take things for granted and I had taken so much. We are used to roads, lights and signs helping us to get everywhere, but that has been so just for the last 100-150 years. Before that, only the main roads were signaled, darkness reigned in the night and going out was dangerous. it took my body less than one minute to remember all those ancestral lessons, to get on guard and to adopt a defensive approach to the whole thing. Instinctively I made myself bigger to appear more fearsome, walked noiseless (that’s an old habit), took breath silently and listened intently. I will not say I was scared, because I was not, but I was not comfortable either. I was aware and alert. I had taken my place in the food chain naturally, although the predator that worried me most was another human being, as has been for us the last 70,000 years. This walk had nothing to do with the one in the evening. I was not thinking about the château as a beautiful place to see at night, that would come later. I was seeing it as a place with light where I could control more than 20-30 yards of perimeter. I tell you, those 10-15 minutes lasted longer than what the clock said.

As usual, the difference between thinking of something and living it was great. Fear of the dark. That is kid’s stuff now. We think we know what it is, but in fact it is an alien reality to most of us. It didn’t use to be. And that is why we cherished fire and sun and moon. Civilization has taken that fear from us, as I said, kid’s stuff. But it took my body less than 60 seconds to remember. We believe the wild has gone from us, but it is just there, hidden in wait, in case we need it. I find that concept reassuring, wonderful. No matter how we try to deny our nature, we remain animals, natural creatures, another brick of the ecosystem. Special ones, I agree, but we are creatures of the wild just as any other. I have often spoken of the feelings of harmony and belonging that surface in me when I go to certain mountains and reach their old well-known summits. This was another expression of that harmony and belonging. The feral one. And when I was done and became aware, I loved it. But that happened after I returned to civilization.

When I got to the château the photographer took command and I forgot anything else. I found there was one single dim yellow light in the west side. The moon was not going to help so I went to that side and took some picks. However, I was fortunate. I had gone with the idea of shooting this same image with the moon in it and had I succeeded, the satellite would have bleached all the sky and darkened the château by contrast. Ultimately, the weather decided for me and made the right decision and thus the moon is out of frame and its light shows just enough on the top right and under the arches. Beautiful. From these photos I made this digital oil painting. Hope you like it.

The magic atmosphere of the Chateau de Chenonceau in the Moonlight (click to enlarge).

Of course, this painting comes from an HDR enhanced image. The reality was much darker even there.

The way back was quicker and easier, as returning home always is. However, I returned with the tripod half-extended in my hand ; )

Once again, all you are seeing here is HDR. some of them are single images and other are panoramic compositions. These are series of HDR images that I later merge into wide panoramas. I suppose lots of people are already doing this, but I have developed this technique on my own and, as far as I know, I might as well be the only one doing it. Haven’t checked if others are doing the same. All the panoramas range from 1×5 to 3×5  HDR. That is 5 shots of each of the 1 to 3 pieces that form panoramas that can be printed up to 48″ wide. The last image is a digital oil painting from the picture I shot. I think it suits the motif.

You can find lots of images like these in my galleries. There you will find, landscapes and cityscapes, ancient civilization ruins and modern buildings, moons and seas, planes and boats, guns and flowers, animals and machines, forests and deserts, vanguard and prehistory, graves and newborns, temples, palaces, castles, tanks… You will also find combinations of these images and written messages, in square, vertical, wide and ultra-wide formats. You will find HDR you recognize and HDR you will not detect though it is there, black and white, vintage film shots… However, they all have some things in common: they are all meaningful images, they are all beautiful and they are all mine.

Come in and judge for yourself.

My pictures can be printed in photo paper, canvas, metal or acrylic surface up to 108″ in many cases,  or in greeting card format. You can check them by clicking the images above. I am all in for customizing pictures. All of them can be retouched in many ways, texts added, altered, changed or deleted. Ask freely.

3 Responses to Chapter 26: walk in the dark

© 2023 inspiring thoughts and images | images for walls and minds