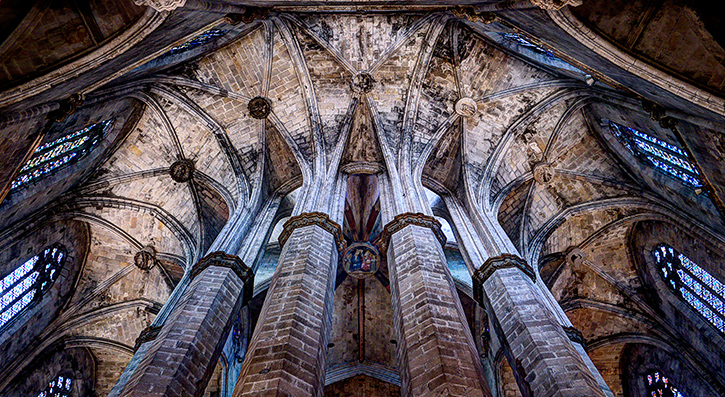 The Cathedral of the Sea, in Barcelona, commissioned and built by and with the hands and effort of the faithful poor for their own sake. A beautiful temple built by the commoners for the commoners (click to see sepia version).

Playing with the infinite

They say it is not good to talk about religion, politics or sports, particularly if you are trying to sell your products to as many people as you can. I do talk politics now and then, albeit tangentially, and I touch spirituality. I will not risk my sky-rocketing sales and zillions of reading fans for sports. So let’s talk religion.

I am not a religious person. I have no faith. I used to, but it faded with the years. Nothing dramatic, it just slipped away by the time I was eighteen. It just didn’t work for me. The universe is so big and old, bigger and older than what our minds can grasp, that a God that has His attention focused on us humans of Earth is just unconvincing to me. We are not that important and besides, given half a chance, we behave rather miserably. We would not deserve such a God. I don’t go for the polytheistic religions either. I do not believe in karma, in reincarnation or anything similar.

Don’t get me wrong, I am not against faith. I think people with faith have answers to questions people without faith do not have. You either have faith or you admit you do not know. There is no alternative to faith but a different faith. Some of us are OK not knowing. We will see when the moment comes if our beliefs work for us, the same way the faithful discover if their faith is enough. After all, faith and reason are two ways to cope, to understand our place in this incomprehensibly huge and ancient universe, beyond which we are not even capable of formulating questions. I do believe in eternity, though. My own rational eternity. If you are not bored already, keep reading…

My concept of eternity

My concept of eternity is so simple it might be disappointing, but it works just right for me and takes my worries about afterlife away. I think I live in a universe where I am eternal. You are not. It is my universe. It started to exist and will end with me. Where was I before I was born? That time simply does not exist. I have always existed. I have not been somewhere waiting to exist and then it happened. That is a notion that affects the reality I see at the other side of the mirror, but here, on my side, I have always existed. The concept of past is merely intellectual and we are talking about the spirit, here, about my soul, me. What will happen after I am gone? There is no after I am gone. I will live forever because my universe and time will cease to exist with me. I am here forever and the length in years of that forever is also a merely intellectual matter. So my whole life spans through all my eternity. Before and after do not exist. I am therefore eternal. And so is each and every one of you in his own universe, at the other side of his or her mirror. The rest of us might die in another person’s world, but that is just at the side of the mirror we share in common, the world we live in.

Maybe I am wrong. Maybe I will die one day and wake to a better world. That would be a nice surprise. If there is an afterlife, I think I will be there, because it just cannot depend on being faithful. One does not choose to have faith or not to have it, and if we do not count faith, I think I will manage to get the credits to qualify. However, until that happens, I will remain comfortably tucked in my own eternity.

I often talk to my father, gone 19 years ago, specially when things go particularly right or wrong. I know he probably does not hear me, but “probably” does not concern me. I like to talk to him, just the same, just in case, and because it comforts me and honors him. You see, extremists of both sides try to set the game table as if there were two teams, those who believe and those who deny. They ignore us boring mortals who just do not spend time thinking about it because there is no way we are going to reach a conclusion. We just try to be honest people and live on, helping what we can and harming as little as we can manage. We do not care for religious fundamentalists, be them Muslim, Jew, Christian or any of the other less imposing religions, or for militant atheists. We live our lives and spirituality away from dogmatism and orthodoxy, so it suits perfectly fine with some of us to say we have no faith and we believe in no afterlife but at the same time we talk to our loved departed. And the happy fact is we are the immense majority. Most of us believe and let unbelieve or unbelieve and let believe. And that is the way it should be. So yes, I love visiting all sorts of temples, I love religious art and I often talk to my father.

I also talk to my dear, dear aunt, died exactly one year ago the day after tomorrow and who most likely, I am now realizing, got me to write about this just today. I swear it was not planed. Guess my subconscious is following his own line of thought and I am just catching up. My aunt had faith. She used to go to mass every Saturday and I would always ask her if God had any interesting news the following day. It will sound topic, but she was probably the best person I’ll ever met. My mother’s sister, she never married, and was a second mother to us, to the point we ended congratulating her and giving her presents for Mother’s Day. She had earned it. She was a humble woman, not one for open confrontation, but she was brave, not only in her daily life and the way she faced it, but also in the epic sense, during her middle-age years under Franco’s dictatorship.

She remembered like it was yesterday the day she found some small coin, went to the market to buy lace for her hair and some matches for her mom —she didn’t care in what, as long as she could spend it—, and the city was bombed from above by the Germans or the Italians. The city was crushed, but it happened the day before Gernika, some 20 km away and the event was eclipsed. Funny Gernika is so famous because my city was probably destructed worse, and many more people died in Durango, but George Steer happened to be in Gernika and it is also a sacred place for the Basque, so now it is a global symbol. My aunt was thirteen when the Spanish Civil war started. She taught me how my hometown was before it was destroyed, because I saw pictures from before and couldn’t recognize the streets. No wonder, the whole configuration changed in the reconstruction. I had no notion that I had grown up in a rebuilt city, but she perfectly remembered the streets that new houses now occupied and the old buildings that occupied what are now streets. Gotta be hard to see your hometown destroyed and then remade at the whim of the destroyers…

However, she was a merry person, not one to dwell on miseries or to focus her attention on the negative part of people or things. She enjoyed life to the last and lived by herself, two minutes walk away from me, until just three months before she died. When she left, my sisters, her sister and I were there with her. I saw her draw her last breath, then let it go. And she did not breath again. Just like that. 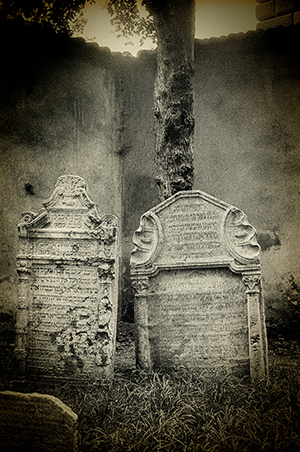 Jewish tombstones in Prague. Two people that know the answers. And then again, maybe not (click to enlarge).

I was happy for her in a way. She had a long eternity, 89 years, she had inconveniences in the end, but didn’t have pain and left surrounded by the people she cared for. She lived a full life, helped a lot of people and was loved by many. She was always independent, self-sufficient and traveled to all places. She left fighting to live another day. She wanted to live on, do more things. I do not know if that is a blessing or a curse, but if it is a curse, I hope to die old and cursed just like her.

I was sad for us who stayed. Us who have lost and miss her. My eternity will never be the same without her spinning in orbit. I always say my father taught me his final lesson when he died. My aunt peeled away all the crust that had grown in my soul since my father left it raw, empathetic, aware. I cherish those lessons, but hate the prize.

So there I summarized it, in a nutshell, take nothing for granted. Enjoy all the sunrises, all the sunsets, all the kisses, the smiles, the caresses, the hugs, the flowers, the birds, the jokes, the conversations, the Moon-rise… Enjoy all the wonderful things of life, big and small, because no matter how common they are, we might miss them some day.

Even if we are eternal. 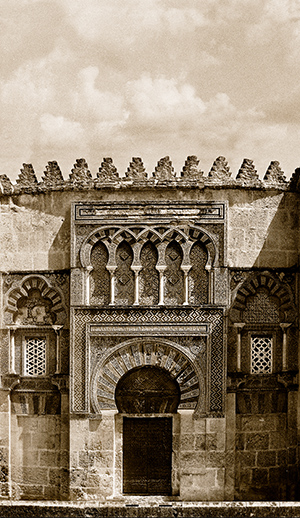 The Mosque of Cordoba, now a cathedral, a breathtaking tribute to faith (click to enlarge).

There is quite a mix here today. There is a digital HDR to begin with, which later sustained heavy processing to enhance each part in the right measure. The rest is digital scanning of 35 mm b/W Ilford film. Angkor is a merging of three horizontal negatives,  Cordoba is the merging of three vertical negatives, which is much harder due to lens distortion, and the tombstones are a single negative with Lomo effect. They range fifteen years and three different cameras. You can find lots of pictures like these in my galleries.

This pictures can be printed in photo paper, canvas, metal or acrylic surface from 8″ up to 108″ in some cases,  or in greeting card format. You can check them by clicking the images above. I am all in for customizing pictures. All of them can be retouched in many ways, texts added, altered, changed or deleted. Ask freely.

2 Responses to Chapter 19: toying with eternity