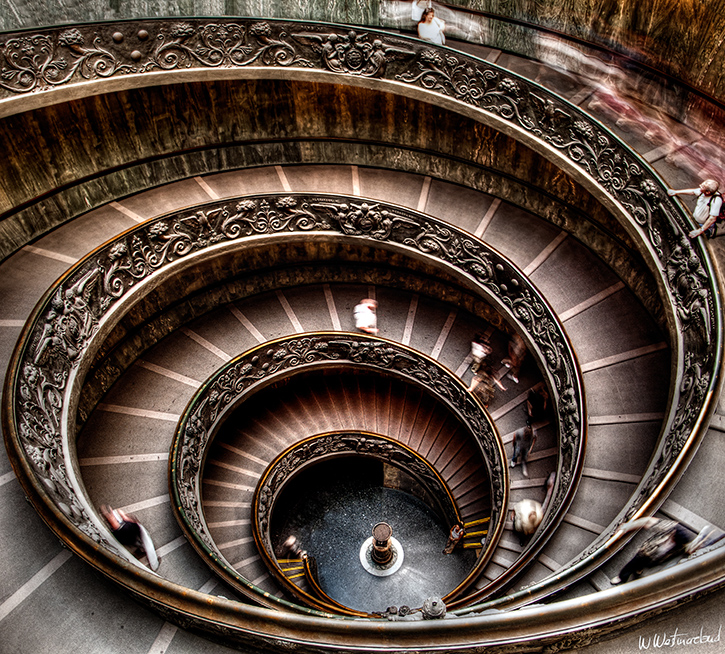 The Spiral Staircase in the Vatican Museums. Simply breathtaking.

The place, the moment. I shot this picture steadying my camera with both hands against the banister at the top, which is round, with the camera tilted down. No tripod. Exposure time: 0.3 seconds. Chances of getting a blurry picture: extreme. I shoot 9 pictures in three different positions. Never saw the girl until I came back home and edited the pics. I always see her since. Today I’m trying to find her.

I have a big canvas with this staircase, the Scala Elicoidale di Giuseppe Momo, in my room. I consider this picture special. You will find thousands of photos like this one in Google, but I have never found one that has both arms of the spiral, the one on the top going left and the one at the bottom going right. One of them is always missing. Not in this one. This one is complete.  I normally don’t go for square pictures but I just love this one in so many ways… and the spiral always takes me to her.

It is like an unfinished business, you know? I made this picture and a girl happened to be in the right spot to be the hidden focus. It is only right that I should try to find her and send her a copy. It makes me wonder how many of us will probably be the unintended center of someone else’s wonderful picture. Wouldn’t it be nice to be reached and told? 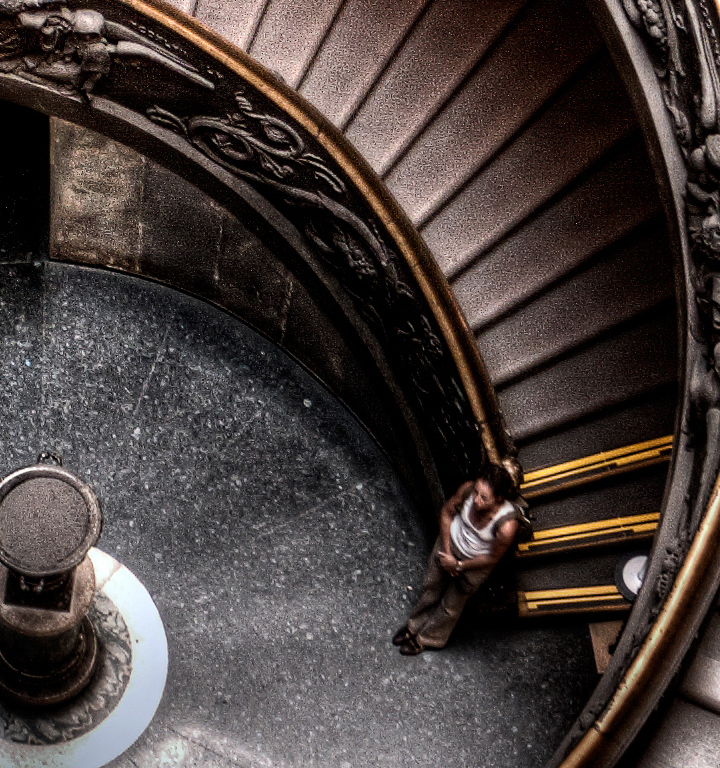 So, there you have, the place, the moment. Do you know somebody who was there about that time? She is a little blurry, guess she shifted her shoulders, but I think she is recognizable. And she is out there… She could be from anywhere, a local girl, an exchange student, a woman on holidays (cannot be certain about her age, although my money is on twenties-thirties)… Can one person find another with just one picture and some help?

The forest and the trees

Visiting he Vatican produces ambivalent reactions. On one side there is an overwhelming accumulation of beauty. On the other, there is an overwhelming accumulation of riches. So much for the vow of poverty. However, you cannot go there and start criticizing because it will not let you enjoy the beauty. Best you can do is open your eyes and try to catch as much as you can. You will not see that much because it is simply overwhelming (I know I am repeating myself but I love the word and it fits so perfect here). There is too much. You walk past literally hundreds of statues, of paintings, of tapestries that would take each a few minutes to enjoy. Or a few hours. You would need days just to take a peek at the museums. And then you have the Sistine Chapel, St. Peter’s Basilica, La Pietà… It is like when the forest doesn’t let you see the trees. You have to plan ahead or you will miss things you shouldn’t.

Of course, we did not plan, but we were lucky. I did not plan in the Louvre, I was blinded by the flashes of a thousand Japanese shooting at the Mona Lisa (I hate flashes, specially when they are shot against a crystal) and missed Ramses II. Argh. So do not fall back on luck. Plan ahead. And after all, at the end of the museums, the way out, is through the spiral staircase. Oddly enough, in this huge forest, this immense Amazon of classic art, The Scala Elicoidale was built in 1932.

I shouldn’t be writing this here because it sort of interrupts the discourse, but I think it will do good to humanity: Do not use flashes against glass or further than 3 meters. They only spoil the picture with blinding reflections on the first case and just illuminate the dust in the second. Average flashes just reach 3 meters or so, and should be used mainly to light objects in the shadows when the background is in the sun. For all the rest, try to avoid them. You see all those flashes in the crowd during football matches and the like? They not only are useless, they actually make the picture worse. They are only marking the location of an ignorant photographer. They should all be… OK, now I got that off my system we can follow  XD. 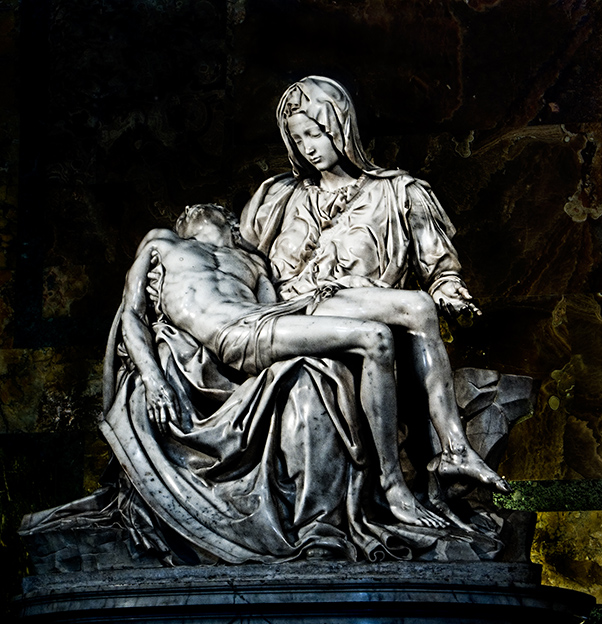 Do you know what drags my attention once and again? Her hand. All she needs to say she says through that hand. Amazing (click on the image to see the gallery).

The Vatican Museums are full of masterpieces, and the conflict grows inside you again. So much power, so much wealth exacted from the believers and spent in exquisite art for the pleasure of corrupt popes, cardinals and bishops. And yet, if not for them, many of these masterpieces would not only not have been preserved, they would not have been created. So even if they did it for their own personal enjoyment and grandeur, they did bring about the production of infinite and delicate beauty that enriches mankind all. La Pietà would not exist, The Moses… They were powerful and corrupt despots, but they were cultured ones. Not very different in a way from the Roman Caesars. And you only need to walk a mile to compare. Rome, the Imperial Rome, has even more greatness than the Vatican. Much older, much more powerful and with no mixed emotions. A classic empire, the greatest ever, and it is all around. The Forum is something surreal. You can walk the streets Julius Caesar walked, pass by his house, see the lane his wife run through when she learned his husband had been murdered. The thermal baths, Nero’s passageway, the Imperial Forums, The Colosseum, the Circus, the Pantheon…, all those names you have heard all your life lived there, all happened right there. To me it was an ecstatic experience.

Some fun facts about Rome

Do you know that after the empire fell and the Colosseum was abandoned it became an exotic botanic garden of sorts? So many wild animals had been carried from distant lands to be butchered there that the pollen they brought in their hair created an ecosystem that lasted for centuries.

Another fact I learned there and which got me really frustrated is that most of the structures had been buried and ignored for centuries, preserving most of their magnificence. It was after the Renaissance, when Imperial Rome was appreciated again that all the thieving took part. Great parts of Rome survived up to three centuries ago. Damn. So close.

Another curiosity. The Romans killed the last European lions. There were actually lions in Europe up to 2,000 years ago, but the Roman aristocrats enjoyed hunting them and they extinguished the species in the continent.

The Roman Forum at night. Rome has two visits. The night-time visit is the first one (click on the image to see the gallery).

Rome is small. You can walk it. A little more than a mile from the Colosseum in the east to the Vatican in the west, most of everything in between.

It is also a safe place you can walk in the night. The city remains alive after dark and the Imperial ruins show a totally different character under artificial light.

Ah, take a day to go to Naples by train, see Pompeii and come back. I would suggest to see Herculaneum instead, less overcrowded, better preserved. Pompeii is huge, wonderful,and the sensation of walking the very stones the Romans walked 20 centuries before is really powerful. You know Pompeii was the first archaeological site in the world? Such discipline did not exist until King Charles II of Spain ordered the excavations to uncover the remains out of cultural interest. And so Archaeology begun.

I am talking just about the Imperial Rome. There is the Renaissance and Baroque Rome also, but I will not get into it. You have heard about the Fontana di Trevi and the like, right?  I guess Stendhal suffered his syndrome in Florence because he had not been in Rome preciously.  I was there for six days, I do not suffer from the syndrome. I will go back. And I didn’t do the tourist thing and drop the coin backwards. My wife did, though.

One thing I noticed, have noticed elsewhere, but it was so obvious in Rome I could not believe it, is how many people visit places just to see them through a camera and then in picture back home. But they do not see them live. They arrive, shoot and leave. Marker. Gotcha. Next. I like to take my time, move about, look at tiny details. You will often not have another chance. I do not know how long I watched La Pietà, but it was a while. Then I chose how I wanted to take the picture. Same thing with the Moses. Lots of people in and out, no chance to see it in peace (missed my caves with paintings which you see with a few people and in silent intimacy for the most part). I looked at it, gorged on it for a few minutes and then decided to shoot from where Moses would be facing me. In those two places there were so many people who came straight, aimed, shoot and left, I was totally astonished. They didn’t stay for ten seconds. Remember how we talked about taking nothing for granted? Some people look at one of these masterpieces and does not see it. I don’t get it. And of course, most of them use flash. 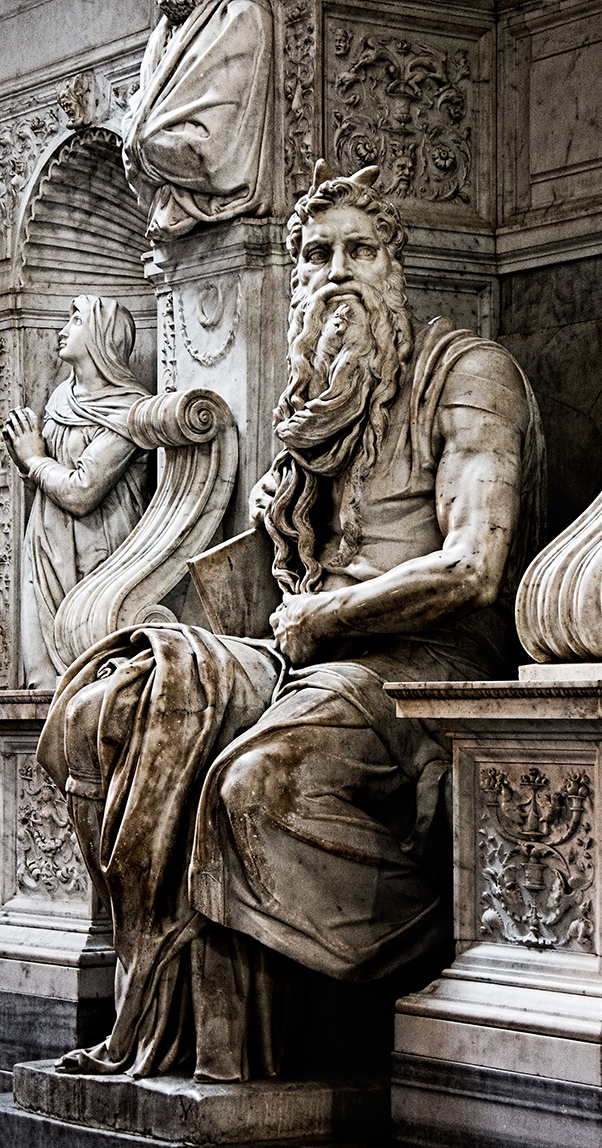 Michelangelo’s Moses, a typical masterpiece in Rome people find take a picture and leave (click on the image to see the gallery).

So, after this short journey through time and space, we return to the image and the idea that inspired this post today. It would be nice to find that girl, send the picture to her and close the circle. It is not like when we talked about love and longing, about how sometimes you cross somebody in the street, you exchange a quick glance and something happens than makes you melancholic you will never see her again. It is not that feeling, since I didn’t see her there. But it is as if I shot this picture on commission for her.

As I said, an unfinished business.

The Scala was shot in three parts that I later manually merged vertically, since the merging program didn’t do it quite to my liking. I then enhanced contrast and detail with my usual secret formula. The process is similar for La Pietà and for the Moses, with the difference that they are single shots, but given the light conditions, the impossibility to use tripods and my general aversion towards flashes (did I say I hate flashlight?), they were pretty tricky to get just so. The picture of the Forum is a horizontal merging of three long exposure pictures.

This pictures can be printed in photo paper, canvas, metal or acrylic surface from 8″ to 24″, 48″ and 60″,  or in greeting card format. You can check them by clicking the images above. I am all in for customizing pictures. All of them can be retouched in many ways, texts added, altered, changed or deleted. Ask freely.

One Response to Chapter 15: girl at spiral staircase, Rome