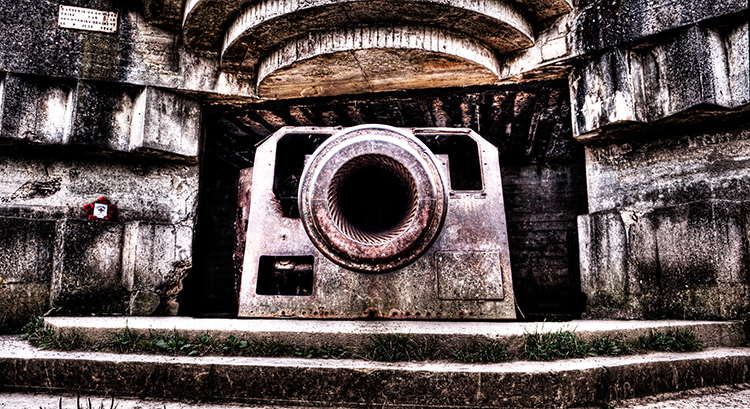 German cannon in Longes sur Mer on the coast of Normandy (click to enlarge).

I said I would write three entries about my journey to Normandy. The first was about what it felt like to travel alone, the second about the war. The third, this one, goes about all the cool stuff that I saw in those experience-packed nine days. Cannons, tanks, submarines, airplanes, toilettes, you name it. If you want to see lots of WWII cool stuff, keep on reading.

As I said, I took my car and drove all day to Mont Saint Michel. After nine hours I set camp and walked the 3 miles that separate the camping from this unique island. I have been to many medieval bastides, cities, fortresses, chateaux, castles… not only in France, but in Spain (If you care for Unesco Heritage, Spain is your destiny), in Italy, Germany… Mont Saint Michel clearly stands out because of its approach. Many people go there and back by bus, car… Huge mistake…

Walking back from Mont Saint Michel at night. This is an HDR panorama. The sky was actually darker 🙂 (click to enlarge).

Once you are inside, Saint Michel is not different from other middle-age locations. It sure has wonderful views, but it is just another place, and smallish at that. It is what you see from afar that takes your breath away and awakens the forgotten childhood love for magic that makes it special. If you ever get there, don’t rush it to the place. It is actually while going there and leaving that the magic happens. I chose the evening. Walked there in the sunlight, roamed the streets, left again to watch the sunset from outside, then went back in again at night, and finally left walking in the dark… 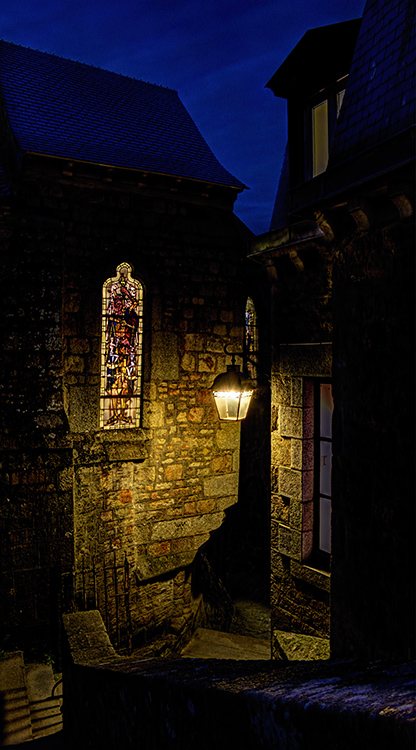 The following day I drove back to take a look in the morning, but quite a few cars were already getting there. Not wanting to spoil the wonderful sensations and memories of the previous day, I packed and moved base camp  to Bayeux. Now, there are many places you can stay at in Normandy, but I wanted to go through as much as I could along the bay of the Seine, and Bayeux, apart from being to the south of Omaha Beach, is more or less in the center. I spent the first Morning in Cherbourg, where I went to see the biggest nuclear submarine in a museum. 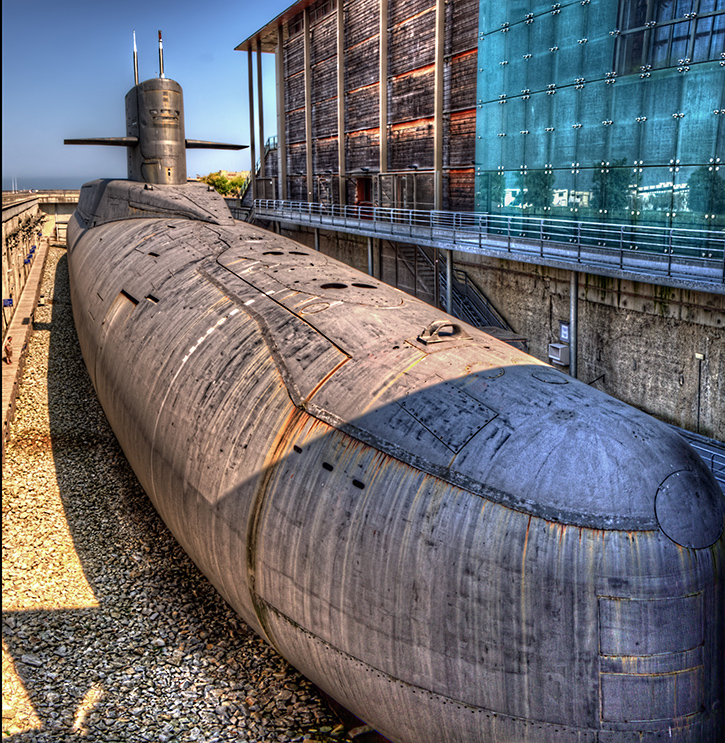 The Redoutable (Fearsome) is the biggest nuclear submarine that can be visited in a Museum (click image to enlarge or here to see a black famed version).

One thing I have mentioned but not stressed enough is that I went on holidays on September. I did it because I could take the days off, and because, going on my own, it would turn out a little cheaper going off-season. I had also counted on fewer people, but, to my surprise, the term “fewer people” fell usually pretty short. I walked through this submarine, around the outside and inside from stern to bows, basically alone. I even shot HDR pictures inside, using my tripod all the time. You can see everything, from the command room to the torpedo area, including toilettes, mess-rooms, missile silos… everything. A wonderful visit. And I did not cross 10 people. 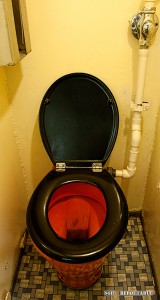 This is another torpedo room of the Redoutable (click to enlarge).

From Cherbourg, and after having seen Mont Saint Michel and the submarine, I immersed myself in the Second World War. There were two persons in me who wanted to see those places, what the man saw and felt I told about here. What the kid in me saw comes now. And there was a lot of WWII cool stuff.

There are quite a few museums that show every little aspect of the D-Day landings, Operation Overlord, and WWII in Europe. Visiting the museums is not like visiting the cemeteries at all. You can easily detach yourself from the final intention of all the stuff you see, which is to manage to kill as many enemies as efficiently as you can, and wonder at the spectacular power and the mystic aura of the vehicles, guns uniforms and other items you see. It is always the real thing and it is the real place.  The items are often war worn, shabby, stained, shredded, shot through… A truly intense experience, quite similar, saving the differences, to visiting painted caves. You can make a connection, feel an intimacy with the people that used these things. It makes them real. You see a helmet with a hole, you cannot help but to hope the owner made it. As I said, surprisingly intense.

There is not a single huge museum where you can see it all. The French know their business and they have managed this particularly right. I cannot find a way to show all these things and places better. It is all there, but in small rations in separated locations, always in the appropriate context and in a quantity you can enjoy without getting saturated. I followed east to west, so I first arrived in Utah Beach and visited the Utah Beach Museum and memorial, right by the very beach. The memorial is on top of one of those massive bunkers, but you have to pay attention because it is surrounded by garden and built on top so if you do not pay attention you will not see the concrete walls. The Museum holds lots of spectacular pieces, among which this beautifully preserved Marauder stands out. There were quite a few other vehicles and cool stuff, but just this plane makes the visit worth any effort. The hangar is amazing too.

The Marauder from behind. Simply spectacular. (click to enlarge).

From there I went to Sainte-Mere-Eglise, where the Airborne Museum is placed by the famous church tower and square where the 82th had to fight so hard and with such heavy loss to take the position in the small hours of D-Day. The Airborne Museum also honors the paratroopers of the 101st, Dick Winter’s men, whom many of us know by Ambrose’s book first and by HBO’s magnificent mini-series Band of Brothers.

Sherman tank in Sainte-Mere-Eglise. You can see the church where the paratrooper got tangled and the figure that reminds of it (click to enlarge). 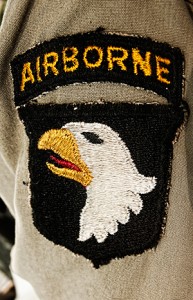 This museum has three different areas with a real C-47, one of the glider planes and some spectacular surprises, apart from lots of equipment, both Allied and German, uniforms and whatnot.

From there… you know, I have to either cut things out or tell about it to quick, so I think I am going to leave it here and add a fourth chapter, call it more cool stuff and upload it next week. There will be more planes, bridges, awesome tanks and some wonderful ruins and chateaux too. Just be patient…

I already told you there is something new about the shots I have been taking lately,those HDR panoramic compositions. These are series of HDR images that I later merge into wide panoramas. I suppose lots of people are already doing this, but I have developed this technique on my own and, as far as I know, I might as well be the only one doing it. Haven’t checked if others are doing the same. All the panoramas and the submarine are 5×3 or 3×3 HDR. That is 5 (or 3) shots of each of the 3 pieces that form the panorama that can be printed up to 60″ wide.  The rest, except the 101st emblem, are HDR too. I did not shoot many pictures in Normandy. You can see them in my Normandy Gallery. There are a few 108″ panoramas there and lots of cool stuff.

You can find lots of images like these in my galleries. My pictures can be printed in photo paper, canvas, metal or acrylic surface up to 108″ in many cases,  or in greeting card format. You can check them by clicking the images above. I am all in for customizing pictures. All of them can be retouched in many ways, texts added, altered, changed or deleted. Ask freely.