Chapter 12: we could be heroes

The mouse, the winding roads and the village of Getaria (fragment, click to see whole picture).

There is a little spot in the Basque coast, a small fishing town nested between steep vineyard-covered hills and the sea. The coastline is unforgiving there, little more than a  wonderful winding road between sea and cliff that has been the background of many car TV ads when it is not being repaired because the storms in the Bay of Biscay have torn it apart in several places. Happens every winter.

This little village, called Getaria is neighbor to the more famous town of Zarautz, host of the Surf WCT, twenty minutes away from San Sebastian, and less than an hour from the Guggenheim museum in Bilbao. Next town westwards is Zumaia. We talked about the Flysch a few days ago.

However, Getaria can be made out from far in the distance because of a peculiar peninsula in the shape of a mouse heading into the sea. European cities and villages normally have a shield of arms that represents them. Like all the coast villages of this old land the shield of Getaria depicts a whale. These people were whale hunting pioneers and for them it was a matter of pride, so it was reflected in their shields. The last whale was hunted by the Basque on May the 14th 1901. There is a song that commemorates the fact. However, I didn’t start this post to talk about the mouse, the coast or the whales. We can talk about whales some other time. I wanted to talk about heroes, past and present.

And how we see them.

Story of a mutineer

I wanted to talk about the men of that time through the figure of a man born in Getaria in 1476. His name, Juan Sebastián Elcano.

On September 6th 1522, three years minus 14 days after their departure from the same point, 18 starving barefoot seamen sailing a battered ship full of spice from the Moluccas  arrived in southern Spain. They were the survivors of an expedition formed by five ships and 234 men. They were dressed in rags, thin beyond recognition, had lost teeth to scurvy. And they were filthy rich. They were the first men to circumnavigate the world.

We all know about Magellan and his expedition. Magellan, who was Portuguese,  left Spain in September 1519 with five ships and 234 men in search of a route to the Pacific trying to reach the Spice Islands without having to cross the seas controlled by the Portuguese. The enterprise sailed soutwardsh along the South American coast looking for a passage to the other side of the continent, but failed. Magellan’s captains mutinied in order to return to Spain, but the uprising was smothered, two of the captains killed and the expedition continued. Elcano was among the mutineers and had to endure forced labor during five months.

Magellan did find a way through the following winter, a year after, along what we now know as the Strait of Magellan. Two ships short, one mutinied again and another wrecked, they sailed into such a calm sea they decided to name it the Pacific. They spent three months without touching land. They ate rats, leather, sawdust… the water rot, and scurvy and famine were merciless. They finally reached the Philippines. Magellan died in a battle the Spanish lost attacking a local tribe to win the support of their enemies. He died days away from the Moluccas, the Spice Islands  they were trying to reach from the beginning. His successor and another 30 men were killed  by another tribe during what they had thought was a friendly dinner. The remainder of the expedition burned one of the ships and divided in the surviving two. One of them, too damaged to continue decided to risk the way back through the Pacific and the strait of Magellan. Elcano, with the ship Victoria full with spice, decided to keep course and sneak through the Portuguese waters as originally planed. And they succeeded.

Elcano would die of scurvy, aboard the Victoria, in another enterprise to Moluccas, four years later.

What pushed these heroes?

I don’t mean what pushed these sailors, I mean what pushed the men of the past, that they would risk certain death so matter-of-factly. I guess they were used to hardships we do not fathom and that made the choice easier. Or maybe they just didn’t know what they were getting into. Maybe the trees didn’t let them see the forest. Whatever the reason, these men seem of another breed and in comparison we are childish, whiny, peevish. Those men were heroes. And our streets and squares bear their names, their statues, we remember and worship them.

Where did these men go? We have turned soft under our welfare. We have gotten so accustomed to living easy it does not seem easy to us anymore, and when we face some mildly serious problem the world falls down on us. Of course, we have human nature to thank, a few real problems make us grow a thicker skin again, but it is not standard issue anymore. However, these heroes of the past still exist, they still remain. And they are countless.

We call them illegal immigrants. Aliens.

Europe conquered the word between the 16th and 20th centuries. We controlled, enslaved, decimated and genocided wherever we could or had to. We stole the riches, destroyed religions, cultures… we got bigger by conquest. The USA emancipated and followed suit, like any other European country and snatched the rest of the subcontinent from the hands of their former inhabitants. Australia, New Zealand, Hawaii… I am not accusing, or assigning guilt. We cannot judge past history from the present. It is very difficult and unfair. I think the Spanish massacred the Central and South American civilizations, but these people lived massacring each other also. I cannot imagine they would have treated Europeans better had they conquered this side of the Atlantic. I can say the same of North America. A terrible genocide. South America n population is mainly indigenous, but North American Indians are almost gone. However, they had been killing each other mercilessly for ages. Just like the Europeans. Afro-American population comes from the slaves brought to America in mass during centuries and blame the white men for it. It is partially fair, but they seem to forget it was fellow African people from enemy tribes that sold them in the first place. There has not been a conquer of the tame by the violent. There has always been a supremacy of the strongest. Terrible but true. White men are not worse than the rest, maybe just more organized and deadly. So no, I am not saying I am taking the blame for anything. That is just how history has ever been and unfortunately all races have been always racist.

That said, we cannot ignore the fact that it was us and no others who dominated the planet to a big extent and used it to our own convenience, thriving at the expense of the colonies and pseudo-colonies we created. And we still are. South America has been a disaster for centuries and is now trying to shake misery off its shoulders after decades of dictatorships supported by the free world. Africa is a complete disaster as a result of the unnatural countries and frontiers the Europeans left when they said they left. Only we didn’t. Europe, USA and now China fight for African natural resources and keep it down on its knees so we can obtain them at a low cost.

We cannot say that is what was done anymore. That is what we are doing now, today, and the result is desperation. This desperation pushes people. It pushes them to a point that they will risk certain death  matter-of-factly. They are used to hardships we do not fathom and that makes the choice easier. Or maybe they just don’t know what they’re getting into. Maybe the trees don’t let them see the forest. Whatever the reason, these men, these women, those children, seem of another breed and in comparison we are childish, whiny, peevish. Those men, women and children are heroes. Rings a bell? The difference is that these people are not dying seeking Eldorado or Tenochtitlan, These people are drowning in the Mediterranean,  or lost in the desert of Mexico, where we see them they annoy us, but they are dying all through Africa and all through South and Central America, on their way north and they are dying seeking only dignity. Just dignity.

That is pretty bad, but it gets worse. If they reach our countries, those beautiful civilized counties we are so proud of, where we created the UN, the human rights, even the iPhone,  and where we tend to forget we got rich by keeping others poor, they are tagged illegal. Illegal immigrants. The term itself makes me retch. How can somebody’s effort to escape poverty, hunger, dictatorship be illegal? How can we be so nauseatingly selfish as individuals and as societies to find arguments to close our borders to them? How have we allowed our souls to rot so bad? When I hear we have to help each other, but at the same time that foreigners come to steal our jobs I just get sick in my stomach. We simply suck.

We need to close our ears to all this terrible “reasoning” we have been showered with forever and start to see things with the candor of our children. Kids have no prejudices, they do not distinguish between us and them, not until we teach them. We are so proud of being the vanguard, we think mankind has reached unthinkable heights, and it is true, but we tend to forget a train arrives only when the last wagon reaches the station, and our last wagon is shamefully behind. We have to help them where they live so they are not forced to leave their friends and families, cross several countries, pay mafias and defy the seas or deserts just to have a chance at a decent life. And if they come we have the moral and ethical obligation to help them. There is no us, there is no them, there is just human beings. And these are heroes.

We could be heroes too. 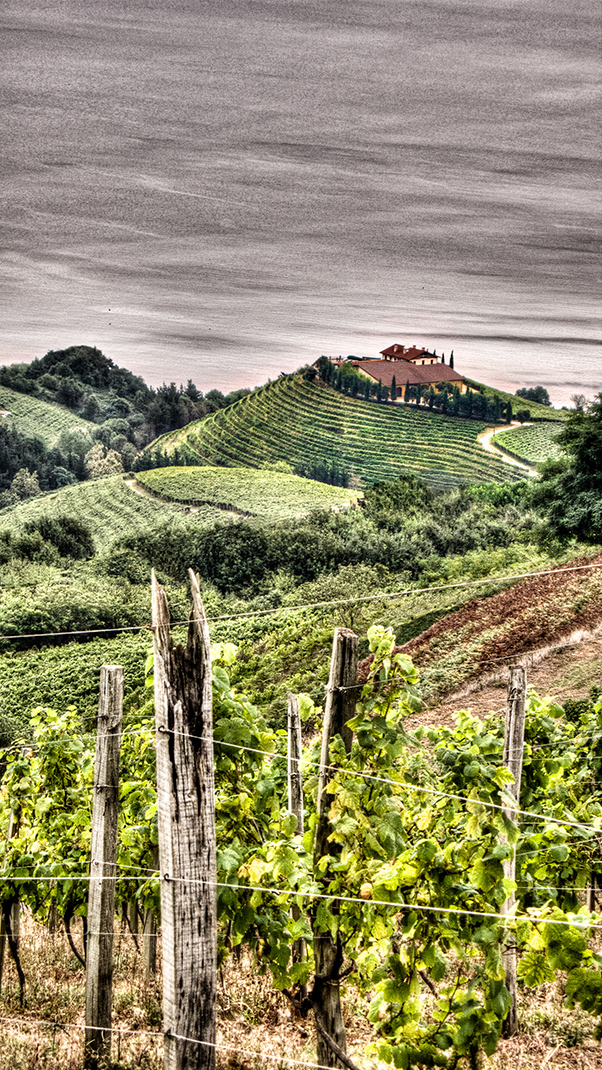 Another view of the vineyards in Getaria (click to enlarge).

The first picture is a merging of two pictures. Processing to enhance color, contrast and clouds.

The second picture was shot first the same day. The farm actually shows in the other picture, in the center left of the image. It is a single RAW  HDR . There is some work afterwards to increase contrast and enhance colors. More pictures like these in my Gallery about the Land of the Basques.

This pictures can be printed in photo paper, canvas, metal or acrylic surface from 8″ to 72″ and 48″,  or in greeting card format. You can check them by clicking the images above. I am all in for customizing pictures. All of them can be retouched in many ways, texts altered, changed or deleted. Ask freely.

« Chapter 11: win a world championship Chapter 13: take a walk on the wildside »