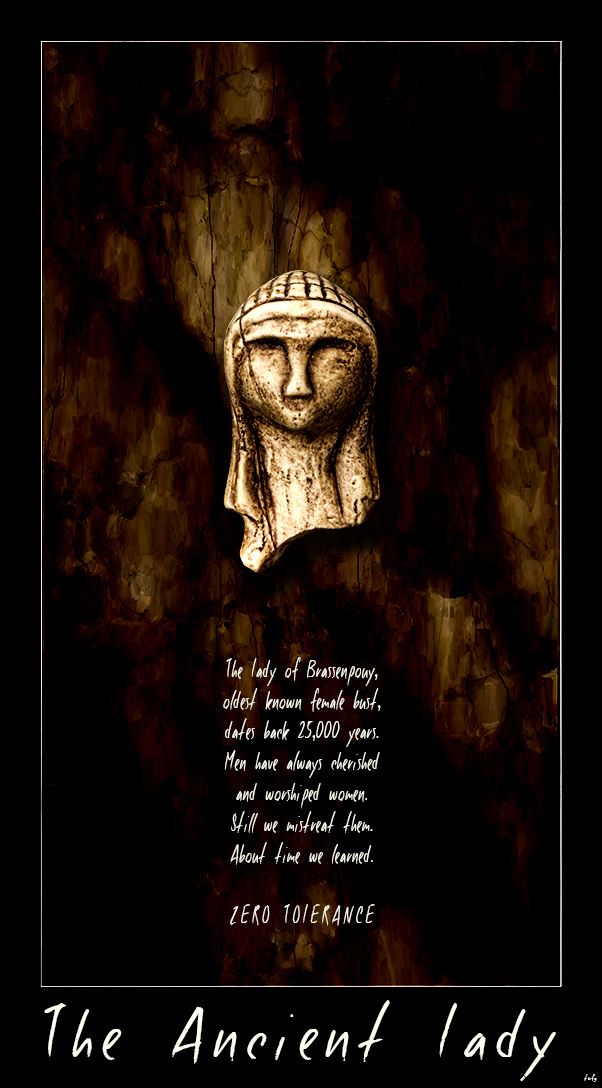 One of the many prehistoric traces of cult to women and femininity.

Prehistoric cavemen painted things they considered of interest. They painted all kinds of animals. There was something mystic about them, beyond the hunt. They also painted and carved women. Women were worshiped, it is believed, because they produced the magic of life. Figures called venus, with exaggerated feminine attributes,  have been found in caves all around Europe, often associated to red pigment, a sacred color. Blood. Life. We have worshiped women since before we know. Women have mystified men from the beginning of time, but we have made them pay. And we still do…

A woman is assaulted or beaten every 9 seconds in the USA, and one in four will experience at least one incident of physical or sexual violence in their lives. Half of the women in Canada have had at least one incident since the age of 16. One in three women in the EU report  abuse since age of 15, with stats getting systematically worse as you move north from the typically considered sexist Mediterranean countries (one in five) into the more civilized northern states (about half). Countries usually considered “exemplary” are at the shameful head of these stats: Denmark, Sweden, Canada or Finland, followed by countries of huge cultural influence like the USA and the UK. Abuse is not concentrated in any particular segment of society. It is a scourge that transcends formal education, wealth, religion and race. We are obviously doing something terribly wrong at home, at school, in the courts and in the media. We call ourselves civilized, the vanguard of human civilization, while we look elsewhere and turn our backs on this screaming shame.

We cannot be content because matters are even worse in some non-occidental countries. Our numbers are utterly shameful, our society is sick, and our pretended ignorance only adds to the problem.

This cannot be tolerated.

What can we do?

Well, there is a lot that can be done. We can discard the ideas that we can do nothing,  that this is normal, and that they probably had it coming.

Then we can put all the weight of society on the assailants. Would you be friends with a guy that beats your wife? Then how can you be with one that beats his? Because it is not your problem? I think it is, and if you do not agree, then you are part of the problem. These guys have to be actively isolated by society, beginning by their closest acquaintances,  their deeds made public by the local media, and their women —and children— openly supported by society and authorities, also beginning by their closest acquaintances. This support is essential, because being abused is not something to be ashamed of —shame should  lay exclusively on the abuser— but sadly, the psychological violence that comes with the physical one often makes the victim feel guilty. We have to give voice to the silenced, scream outrage every time something like this happens, and nevermore let it be swept under the rug. No half measures, no equidistance, no fake politically correct attitudes. Full support, full condemn, zero tolerance.

We can also help assaulted women by changing the laws, so action can be taken faster and more efficiently towards their protection. These women should be attended by specialized agents, have access to escort, shelter, and a means to start a new life. Many women endure because they have nowhere to go, they have no money, and they are going to end in the same house with the man they denounced to be brutalized again. Or worse. They are actually slaves. This cannot happen.

There are countries where social awareness is being boosted with determination. Every single woman murdered by a man is shameful national news. Symbols representing the demand for protection for women are seen in every store window or door, in private houses, on the streets. There are untraceable assistance numbers to call to. There are courts specifically assigned to these cases,  much more sensitive, swifter and consistent when administering help or justice. The constant presence of these cases in the media, the change in social awareness and the swift measures, are helping more and more women to denounce aggression, to end their feeling of shame, and to terminate impunity. There is still a long way to go, but results are coming. We only have to imitate and persevere.

Last but not least, education. I was fortunate to grow in a house full of women, where being a boy was no advantage. I did miss a brother, but I learned equality from my earliest childhood, shared chores and had no privileges whatsoever. What is more, in case of conflict I had to run away because my sisters would hit me, but I would not hit back. I used to flee laughing hysterically, as they could use their nails with a vengeance, but it never crossed my mind to stop and hit back, which would have been ridiculously easy. If it had, my father would have crushed me, but he never had the need to raise an eyebrow. Nowadays, both my wife and I work, and share all the house chores. Our two sons are getting in the program slowly as they grow up, with no notion of what they must or must not do because they are male. The truth is that if we do things better at home, all the other measures will not be necessary.

But we are still not so civilized.

Take nothing for granted.

10 Responses to Chapter 6: our cherised women